AD: This trip was sponsored by West Coast Waters, a campaign to celebrate Scotland’s diverse west coast ahead of VisitScotland’s Year of Coasts and Waters (#YCW2020). Having grown up and spent almost all of my childhood holidays on the west coast, sharing my lingering love for this area of Scotland was something I wasn’t about to pass up!

It was a perfect September day. There wasn’t a cloud in the sky. A watercolour white haze sat on the horizon, with cyclists and cars streaming towards the harbour in anticipation of good weather. We were at Ardrossan, a town an hour south-west from Glasgow on the Ayrshire coast, to catch the first of five ferries we’d take this long weekend towards the largest island in the Firth of Clyde. 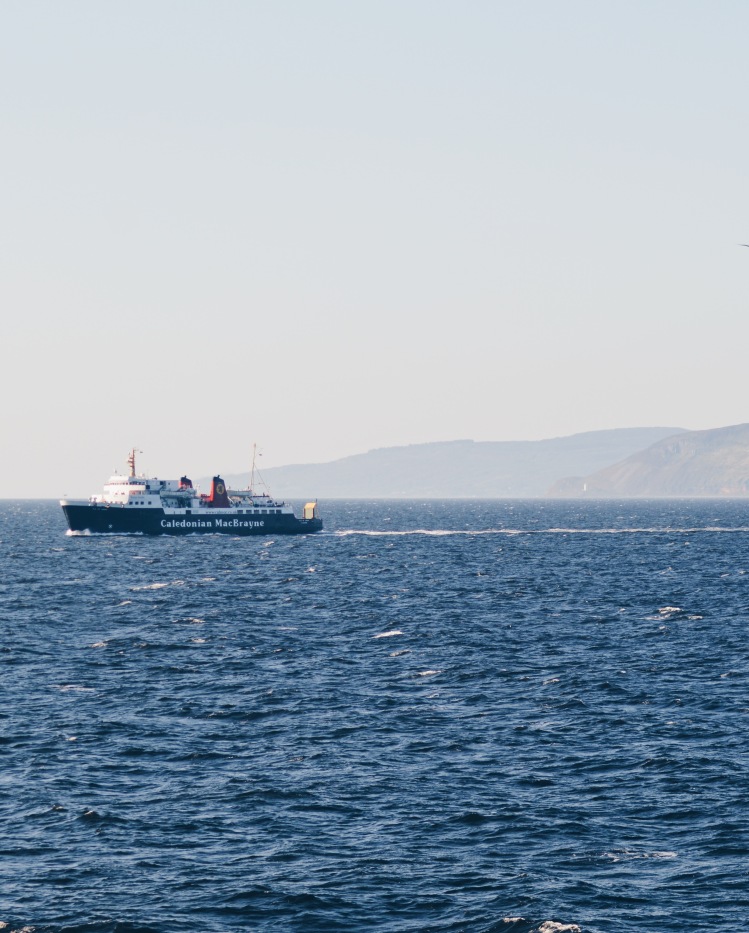 As the CalMac ship pulled away from the quay, Arran — our destination — came slowly into focus. Outside on the viewing deck it felt like midsummer, the warming sun a microscope on the details of the island. The north, dominated by the Goatfell range, was all peaks and scree; the south fertile fields, woodland and cliffs. Through my lens, I framed an island so often referred to as ‘Scotland in miniature’, which as the name suggests is, like the mainland, also split by the Highland Boundary Fault. The contrast between rolling and rugged was made more evident as we berthed below the hills at Brodick, Arran’s main town.

We began our short 24 hours on Arran with a stroll along Fisherman’s Walk.

As part of the trip, we had just a day on the island. Despite the fact there was lots on our itinerary, I wanted to immerse myself in the scenery and surroundings as much as possible (which in practice meant as many walks as we could squeeze in, and trying to capture memories with my own eyes rather than my SD card). Nevertheless, I had to blow a precious 30 minutes of our allowance buying a replacement waterproof jacket in Arran Active (the one I’d ‘packed’ was still reclining on the back of my parents’ dining room chair on the mainland).

From there, we strolled along the esplanade in Brodick, the summit of Goatfell reflected in the water. The waves came up to where we walked; unlike in Glasgow city, which wasn’t really that far away, the sea was a constant by both sight and sound in Brodick, even if over the coming days the sun would not be.

From Fisherman’s Walk we returned to the car and drove south to Lamlash, a village on the east of the island which overlooks the impressive mount of the Holy Isle, home to a Buddhist community — it sat in the bay like someone had sliced the top of some other scree-dusted hillside and plonked it in the water. There was a flurry of activity on the slipway: a crowd of kids and adults (and the occasional dog) was supporting the swimmers taking on the annual Lamlash Splash. We watched as, one by one, they returned from their circuit around the Holy Isle, the spectators clapping as each swimmer reached the pier.

For lunch, we stopped at the rightly popular Old Pier Café.

Owners Evelyn and Chris made us very welcome, and between the home-baked sweet and savoury selection and trays of cakes in the fridge, we re-read the menu to sharpen our decision. I opted for the goat’s cheese and caramelised onion focaccia, with Ben going for the huge sausage roll. Both were delicious (I can confirm this as I may have stolen some from my partner’s plate). With two bits of baking — a salted caramel brownie and a peanut flapjack — tucked in my rucksack for later, we hit the road again with happy stomachs.

We soon reached the south of the island, stopping at Kildonan Bay where we hoped to see some seals enjoying the midday heat. Aside from two balancing like fortune cookies on some outlying rocks, the main attraction was instead the panorama out past Pladda and its lighthouse to the west coast equivalent of Bass Rock: Ailsa Craig (interestingly, this is one of only two places in the world where they quarry granite for curling stones).

From the Eas Mor circuit, we could see the trees below beginning to turn.

This was the same view we’d get a half-hour later as we strolled up the sharp ascent to Eas Mor waterfall, a pine-lined forest path with a dramatic gorge and that same, but higher, perspective across to Pladda. We hoped to continue the hike up to Loch Garbad, but the path was closed for forestry works (almost like the island was teasing us to make a return trip). We paused, looking below, where a few brave little gold leaves on the deciduous trees had started to turn. 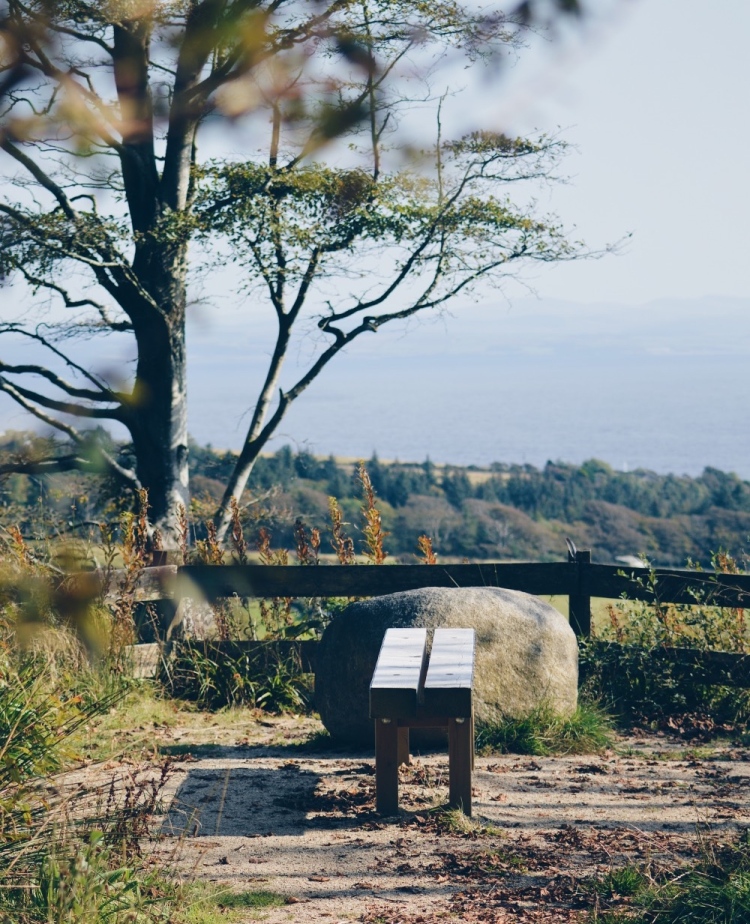 From Kildonan we followed the A road — it’s very difficult to get lost driving the circumference of Arran — past the impressive Lagg Distillery, the new multi-million-pound sister to Arran’s existing stills, and then onto Blackwaterfoot village. Here we met former Glaswegian turned adopted Arran native Andy McNamara, outdoor instructor and owner of Otter’s Tail Adventures.

For the next few hours, we’d be experiencing some of Scotland’s stunning west coast slowly and sustainably by sea kayak.

From Machrie, a short walk from the famous standing stones, we pushed the kayaks over pebbles and slid ourselves onto the smooth water. By this time it was almost 5pm, and the water was silvery in the near-horizontal evening light. We chatted with Andy along the way, hearing more about his earlier travels and decision to settle in Arran — could you imagine a better 9-5 than his? — as we glided towards King’s Caves.

Although I was mostly focused on paddling at a decent speed (Andy was clearly going much slower than he was used to!) this quiet and calm method of travel meant we noticed much more. A seal stuck its head up behind us, melting its oily head back into the water. Cormorants, with their umbrella-handle necks, twisted their heads towards us from the beach. Andy took us up onto the shore to stand inside the King’s Cave, an alleged refuge of king Robert the Bruce, which felt so dark and tall we could have been inside the carcass of a whale. On the rock, there are intricate carvings of animals, people and patterns, all of which are said to date from the early Medieval period.

Out on the water, the distractions of modern life just melted away.

Further south, Andy pointed out ‘dinosaur footprints’, fossils of a strange reptile who walked here around 270 million years ago, on rock tucked away amongst trees and ferns. The three of us noted the exaggerated smoothness of the print, the same fate of Greyfriars Bobby’s nose in Edinburgh, and whether its wearing was an apt price to pay if it proved that the next generation was engaged with what had come before. Andy thought that perhaps it was.

Tackling the strong swell around the point, we returned to Blackwaterfoot in the tangerine twilight. After almost two hours of kayaking, we peeled off our wetsuits and took a table at Blackwaterfoot Lodge for a meal. We were joined for a drink by Sheila Gilmore, executive director of tourism organisation Visit Arran, who spoke to us about her lifelong passion for the island and her desire to share it more widely with others. Her enthusiasm for Arran life and the close-knit community (who incidentally were playing a charity rounders match at Blackwaterfoot the following day) was infectious.

The plates then began arriving, all served by a young and talented team of staff.

Prawn tacos, followed by crab and mussel linguine; a burger made with locally-reared beef; and a crème brûlée beside a warm biscuit. We began plotting when we could next take a long weekend for a return visit. Meanwhile, one of the servers came over and recommended two island beers, one an Arran pale ale and the other a stout called Clyde Puffer. I don’t usually like dark beers, but this one had a caramelised coffee taste which I loved. I reported this to our waiter when he asked, and he smiled, revealing that he himself had crafted the drink at the local Isle of Arran Brewery. A pretty special chance encounter! 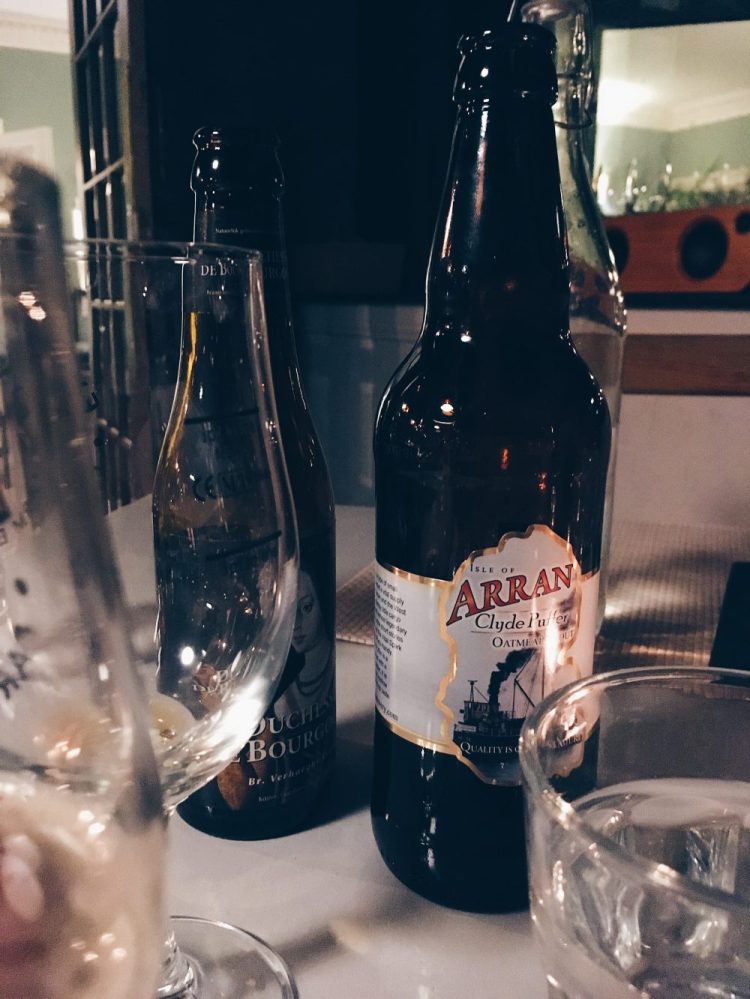 After finishing our drinks and a few whiskies on the house, we wound back up the staircase and fell onto our mattresses. The next morning, we would have a gentle start before making our way north to our second ferry from Lochranza to Claonaig on Kintyre. Right then, though, our bodies drifted off to a well-earned island sleep before our second day started.

Although our 24-hour trip to Arran was short, it was sweet. Although iconic Scottish islands like Skye and Mull are popular on social media sites like Instagram — which are now often serving as digital guidebooks for would-be travellers — others like Arran need our love, too. This island has just as much to offer as any other from its cracking coastlines, wildlife and history to local food and drink, with the obligatory ferry crossing adding a sense of nostalgic magic to any adventure over here. I’ll be back, because a day didn’t do Arran justice. There’s still much more to discover.

Have you been to the Isle of Arran?

The West Coast Waters 2020 Campaign is a partnership initiative and has received funding from the VisitScotland Growth Fund. Find out more.

One thought on “24 hours on the Isle of Arran”