With its sandstone-lined streets and distinctive mock-gothic university, Glasgow’s West End is beautiful.

And its recent role as Boston and Harvard in Outlander has only bolstered its popularity with a new audience.

This is a bourgeois bubble of Scotland’s largest city but for me, it holds more memories than a quick cameo in a TV show.

It was here, two years ago, that I graduated: sipping champagne with my classmates under the cloisters, celebrating five years of exams, essays and a ridiculous amount of reading… And, for some reason, I hadn’t been back to the University of Glasgow since.

So it was about time I returned.

You may have already guessed this, but my Scotlanders blogging pals are a bit Outlander-obsessed… Neil, who lives in Glasgow, is rather eagle-eyed and had recognised the exact road where they’d filmed Claire and Frank’s Boston scenes in season three (Dowanhill Street, fellow fans).

Consequently — knowing we could also bag ‘Harvard’ or Glasgow University in the same breath — we met on an autumnal October Sunday to wander the West End streets and grab some photographs. 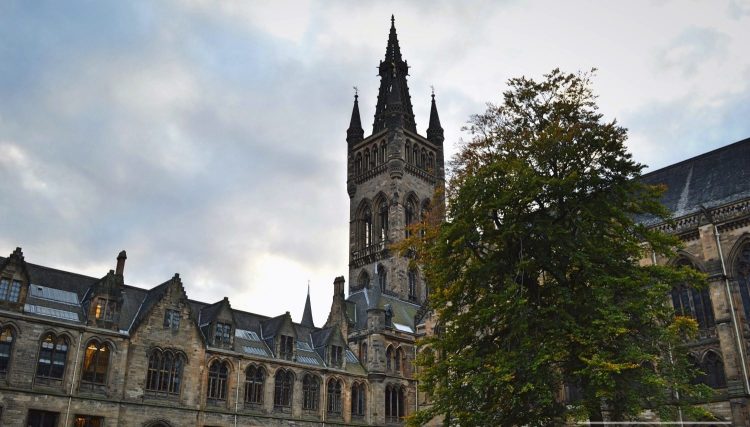 First up was the quiet neighbourhood of Dowanhill with its leaf-lined lanes and red tenements.

The buildings here are all around three floors tall, with traditional stained-glass windows and small front gardens; the architecture more down-to-earth than Edinburgh’s intricate facades.

It’s still beautiful though, and in comparison to Edinburgh’s omnipresent greenery you can almost feel the giant mass of Glasgow humming far away from these tranquil streets.

We then walked south towards the University of Glasgow.

The nostalgia must have been building inside me in the two years since I’d stepped foot on campus, because as we wandered uphill towards the Main Gate — the spire peeking out from above — I couldn’t stop smiling (Neil later referred to this as my ‘constant beamer’).

Up the stairs, into the courtyards with their yellowing trees, the lamps brightening as the sky dulled… It was magical. So many memories, but aside from that, just pure admiration of the architecture and Hogwartsian mood of the place. 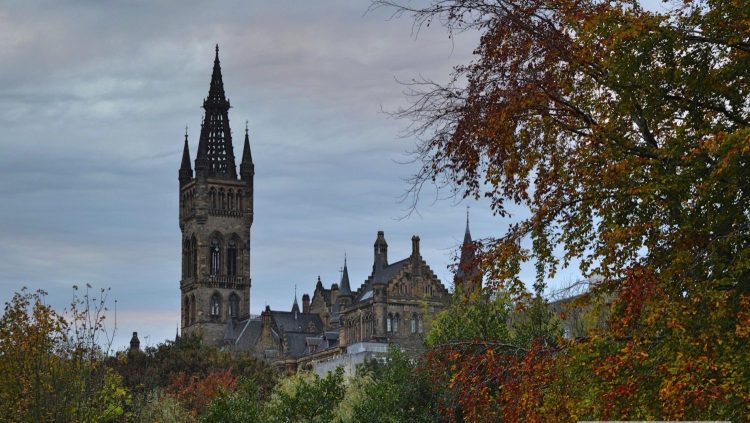 After, we strolled in the shadow of the spire towards Kelvingrove Park.

Past the tree-lined Kelvin Way and across the bridge — near where Claire walks with baby Brianna early in season three — the light continued to fall.

There’s a fantastic vista as you climb the slopes in Kelvingrove, with posh Park Circus up ahead, that lets you look back over the kaleidoscope of leaves to the university.

I can’t imagine a better time of year — especially with Halloween around the corner — to wander here, feasting on the colours and gothic spirit of this corner of Glasgow City.

Have you visited the West End? If you’ve got a favourite spot or café, let me know in the comments below.