So that’s it. Normality has resumed in a fatigued haze of awful 6am alarms, bleak breakfasts and caffeine-fuelled to do lists. But let’s just rewind right back to the start — of the new year at least — when time was slower and the only thing on my mind was where my next post-Christmas mince pie was coming from.

At the beginning of 2017, we escaped the festive bustle of family visits and too many meals with a weekend break to rural Perthshire.

Our destination was Alyth, a small and still village hidden between Blairgowrie and Forfar. With the Sidlaw Hills to the south, Cairngorms to the north and thick woodland of Dunkeld in the west, it’s an ideal base for outdoor activities in the beautiful region of Perthshire.

But the nature attraction isn’t the only reason to visit this area of Scotland. Like all regions — the Highlands, Fife or the Borders — you can always discover hidden gems if you dare chip away at the guidebook stereotypes and delve a bit deeper. So here are four reasons you should run away to rural Perthshire for (at least!) a long weekend in 2017.

Perthshire is full of wonderful walks

Crammed full of thick forest, white waterfalls and majestic mountains, Perthshire is an outdoor lover’s paradise. Although autumn will blow your socks off (and probably break your SD card) the remaining seasons are pretty spectacular too. We recently visited in winter, where the unusually mild weather welcomed us with thick fog and morning dew.

On the off chance that things cool down this year and we get a dump of snow, serious hillwalkers should bag the Cateran Trail or head to Schiehallion and Ben Lawers for the white stuff. But if you’re more of a weekend wanderer, the Alyth area boasts some beautiful short walks not too far from the town itself.

On the final day of our stay at Vanora’s Cottages, we drove north for fifteen minutes to reach Reekie Linn. Strolling along beside the river — the adjacent gorges deepening as we continued — we finally reached a tiny peninsula, ringed by trees with the waterfall dropping to the plunge pool below (which reaches a depth of 36 metres!) There are two vantage points, the last a bit further around the top of the gorge, where you can look directly back at the falls tumbling southwards. A pretty astounding wee spot.

Closer to the village, you can walk the Hill of Alyth or if you fancy exploring the wider region head to the Hermitage. This National Trust for Scotland site beside Dunkeld is stunning in any season; a forest full of paths with the tiny gem of Ossian’s Hall at its heart. Here’s the visitor information you’ll need, or why not read my blog from back in autumn?

Perthshire will give you cottage envy

When we visited the region at the start of 2017, we spent our long weekend in an EmbraceScotland property on the eastern edge of Perthshire. For two nights we stayed in Camlann, one of Vanora’s Cottages, which was situated a short walk off Alyth’s main street. After driving through pockets of thick fog, we arrived in the dark village square and were greeted by owner Clare, who took us past the shopfronts and up a narrow lane to Camlann.

Part of a storybook row of nineteenth-century cottages, stepping over the threshold was like stepping into our dream home. Traditional low ceilings, stone floors, a beautiful bedroom and French doors out to the garden… And that’s not even mentioning the fireplace! We spent our days reading in the living room, enjoying brunch with the morning light coming through the garden doors, and then we stocked up on logs at the local shop for the evenings we would predictably spend in front of the fire. Isn’t that everyone’s cottage dream?

I’d really recommend this place; it felt just like home (and I say that as someone who is notoriously bad at falling asleep in unfamiliar places!) A huge thanks to Clare at Vanora’s Cottages, the EmbraceScotland team and the Association of Scotland’s Self Caterers (ASSC) for having us. Camlann starts from £280 for 7 nights.

In a village as small as Alyth, you may not think there’s much in the way of restaurants to tempt your tastebuds. But in our wanders through the quiet streets, we stumbled across an award-winning fish & chip shop, the local’s favourite inn, and finally — at the end of a country road — the Lands of Loyal Hotel. 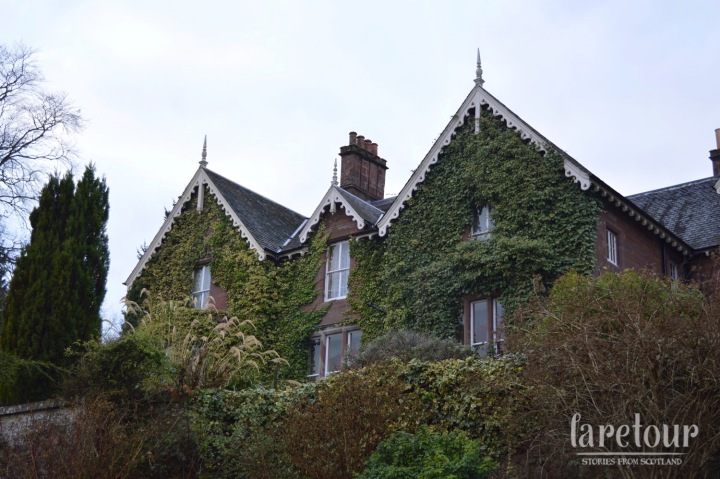 The only way I can think to describe it is Tardis-like. The exterior is quietly grand — a traditional Scottish country house hotel — but the interior is just breathtaking. The hallway is completely clad in wood, a stag’s head looming over the fireplace, inspired by the RMS Mauritania. The dining room echoes that opulence with its vibrant ceiling and another log fire. If I was assured enough to get married or have a massive birthday party ‘just because’, the Lands of Loyal would be at the top of my list. Oh, plus I got the richest dark chocolate torte I’ve ever tasted in my life.

But if — like me — you’re a fan of classic Scottish fare but have completely overstayed your welcome in the Lands of Loyal Hotel then why not take a drive to Perth one evening? There you’ll find the quaint Café Tabou, which champions French cuisine using quintessential Scottish ingredients. Your waistline can thank me later.

Perthshire will gift you rest and relaxation

With the omnipresence of social media and the nigh-surgical addition of our mobile phones to the end of our arms, sometimes I’m guilty of forgetting to just switch off. But when you escape into the most rural parts of Scotland, the lack of phone signal physically forces you to live without Google Maps, Instagram or Messenger. And, for your own sanity, that can only be a good thing.

And so it was that we spent our few days in Alyth curled up by the fire, watching old films on a tiny TV and wandering the village streets with no destination whatsoever (when was the last time you explored without Google Maps? Trust me, you should try it sometime. You take so much more in when you’re not speed walking to the next waypoint!)

Whether you’re escaping the bustle of a busy job, fancy breathing some fresh air or simply want to explore somewhere new, give this corner of Perthshire a whirl. With good restaurants, leg-stretching hikes and cottage hideaways right on the doorstep, a short break here will subdue your stresses before the next slice of real life lands on your plate.

Tell me, where’s your favourite place in Perthshire?

4 thoughts on “4 reasons to run away to rural Perthshire”

Hello, I’m Laura! Welcome to my little corner of the internet where I share moments from my adventures slowly exploring Scotland with a book, camera or coffee in hand. On weekdays you’ll find me in an Edinburgh office doing digital marketing, but I’m happiest at weekends when I’m in my walking boots.

Finding and following a track on the map without any expectations can bring beautiful surprises. A series of lovely little lochans reminded me that sometimes the best day trips are the ones you don't really plan at all ✨ P.S. Those who took part in that impromptu Q&A yesterday — your responses always get me thinking (and scribbling in my notebook) so thank you 😉 #storiesfromscotland #hashtagscotland ⠀ ⠀ #perthshire #itsprimupnorth #hiddenscotland #bbcscotlandpics #visitscotland #onlyinscotland #scotlandisnow #omgb #thisisscotland #suitcasetravels #slowadventure #slowtravel #sustainabletravel #simplyscotland #outandaboutscotland
When the sun comes out just before you reach the summit ✨ A little series from last week’s hill walk, not far from our neighbourhood — proves you don’t have to drive to the Scottish Highlands to feel light years away from normality 💙 #storiesfromscotland
‘I have never felt as rich as I did in that moment of silence’ — Erling Kagge ✨ This quote is from a lovely little book called Silence in the Age of Noise. It's the kind of thing I love to read during train journeys to remind myself that life doesn't revolve around the 7am commute (she says, shivering at the thought of getting up tomorrow) 😉 #storiesfromscotland #welcometofife #littlestoriesofmylife #documentourdays #slowtravel #itsprimupnorth
Frosty mornings at Mount Stuart (a lovely memory from last year I never got round to sharing during the pre-festive rush... and sickness) 🙈 Here's to more moments like these with family and friends in 2020. Happy New Year ✨ #storiesfromscotland ⠀ ⠀ #visitbute #onlyinscotland #lovegreatbritain #itsprimupnorth #hiddenscotland @mount_stuart #thisismykingdom #mybritainwithlove #seasonspoetry #winterstories
Is home where you thought it would be? I grew up in a village on Scotland’s west coast and always saw my twenty-something self living in Glasgow 🎓 But when my first job offer after graduating was in Edinburgh, I had no choice but to jump (cue trying to find a flat in two weeks!) With my other half starting work in Dundee a year later, it made sense for us to find somewhere new in between these Scottish cities. That’s how, decades after my grandfather asked my grandma out on a date in their home county of Fife, we found ourselves there too. And when weekends look like this — a wintry wander by the harbour, looking back at where we started our post-uni lives together — it all feels totally unexpected but, at the same time, just like home ✨ #storiesfromscotland
It’s been one of those weeks where no matter how fast you work, the to-do list doesn’t seem to shrink 🙈 How’s everyone else’s been? Safe to say I’ll be spending most of this weekend recharging on the sofa, planning some walks like this for our little trip up north later this month 🏴󠁧󠁢󠁳󠁣󠁴󠁿 #storiesfromscotland
Sunset on our local beach yesterday, looking back on what my partner calls ‘our former life’ in Edinburgh 😂 In a way it does feel like that, swapping the city for the countryside... I don’t know about you, but I’d take trees and beach walks over traffic and buses any day 🌿 #storiesfromscotland #welcometofife
Do you take your camera everywhere? Earlier, I realised that the photos from this day (a wander around lochside footpaths & beneath squirrel-tapped trees) are the *only* camera shots I’ve got from this October 🙈 Is that a good thing? On one hand, it’s one less device to curtain my IRL experiences. But then again as I get older memories merge into another, so it becomes more important to have tokens of nostalgia, even if they’re digital... What do you think? 🍂 ( this reminds me of a DM chat I had earlier this year with @coppernotes!) #storiesfromscotland #hashtagscotland
AD | When it's a dreich weekend, you'll find me reminiscing about autumn on the Isle of Bute — so Bute-iful (so sorry, I couldn't resist) that we're going back for the Christmas market 🍂 PS I've got a few more photos to share from my #westcoastwaters trip, and they'll be marked as ad because them's the rules 😉 ⠀ ⠀ #storiesfromscotland #YCW2020 #onlyinscotland #hashtagscotland #hiddenscotland #framedbynature #upandautumn #aseasonalshift #bitsofbuildings #kings_villages #cntraveler #architexture #scotlandisnow @visit_bute @westcoastwaters #capturequiet #myeverydaymagic @mount_stuart

All content © LARETOUR Scottish travel blog 2013-2019. Please obtain written consent via the ‘about me’ page before republishing anything you see on this website.