I have felt prematurely festive this year and — until last weekend — I blamed it all on Edinburgh.

It’s tricky to keep those love-hate Christmas songs out of your head when the Street of Light is on your doorstep! Yet although Scotland’s capital is the cliché Christmas city with its European-esque market, to get the real spirit of Scotland at the start of winter we headed north. 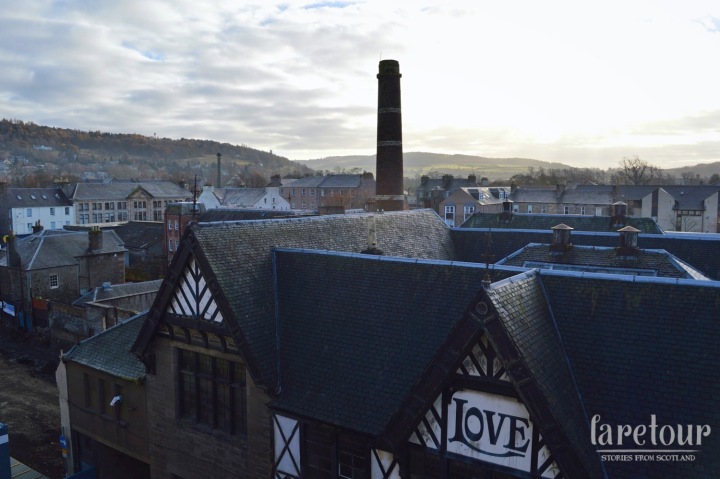 Although it’s the centre of the Perth and Kinross area, the city of Perth is somewhat overlooked in favour of the timeless scenery that surrounds it. We’re guilty of bypassing it too (as proved by our multiple autumn-chasing trips to Dunkeld last month). I’d visited Perth — which was re-awarded its city status in 2012 — a few years prior, but as my Dad and I spent most of the day in the Black Watch Museum we hadn’t given the town centre the attention it deserved. 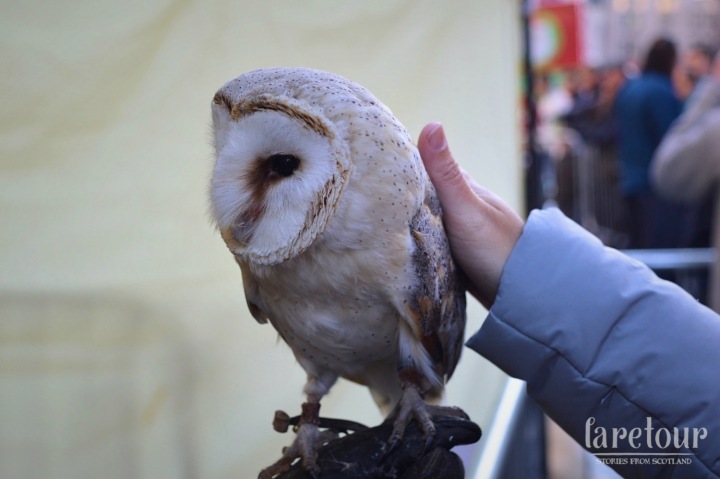 So on a cold and overcast November weekend, we drove just an hour north from the capital to Perth for their Winter Festival and St Andrew’s Day celebrations.

Which, as we all know, represents a double whammy… Because not only was I desperate to rake through the cupboards for all my Christmas decorations once I got home, but I also felt that bubble of patriotic pride (there were a LOT of kilts around the city that weekend).

So here’s how we spent a wintery two days in Scotland’s newest city. A big thanks to Small City Big Personality for all their advice on where to visit, eat and sleep! 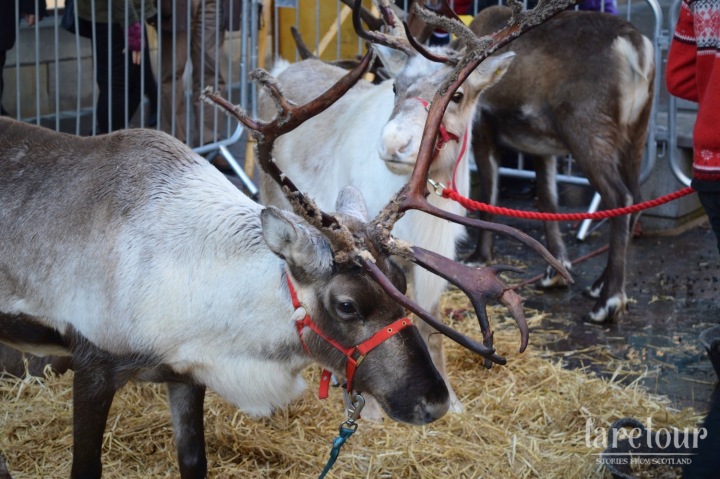 A warm welcome at the Winter Festival.

Once we’d dumped our bags in the Salutation Hotel, we walked towards the bubble of noise rolling towards us from a side street. We stumbled upon reindeer, alpaca, owls and huskies, all here as part of the Winter Festival (and only for a day, as one disappointed grandmother found out). I had far too much fun preening the barn owl’s feathers and discovering how soft alpaca wool really is. 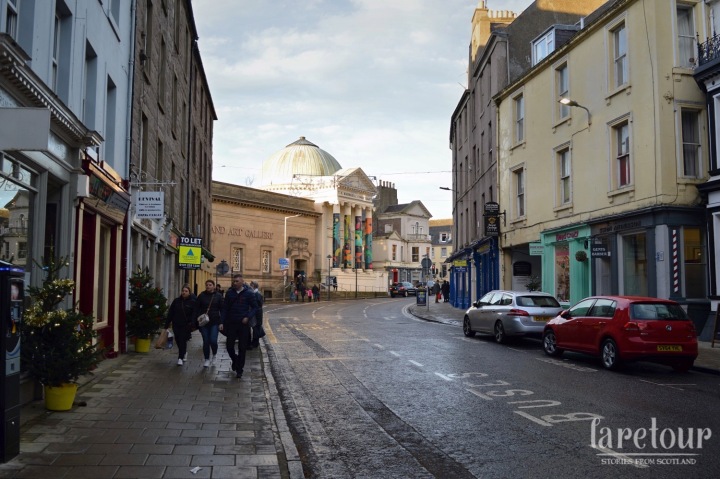 Starting my shopping at the museum market.

As the skies turned shades of pastel, we wandered towards Perth Museum and Art Gallery. It’s one of the oldest museums in the United Kingdom but this Saturday it was playing host to Perthshire Creates Christmas Market. All around the museum, between exhibits and down corniced rooms, craftspeople displayed their designs. 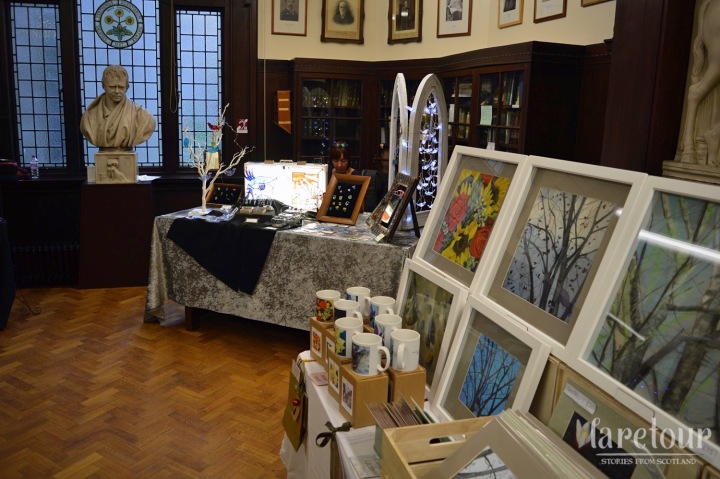 From paintings, stained glass and moulded candles to delicate jewellery, ceramics and fabrics, this market was a joy. I was hoping to get some of my Christmas shopping done and I didn’t leave empty-handed (although I also bought myself some dainty star earrings from Diana King Jewellery… so the present-buying mission went well). There was something harmonious about wandering through the impressive museum halls, the crafts and art sitting side by side on stall and wall. 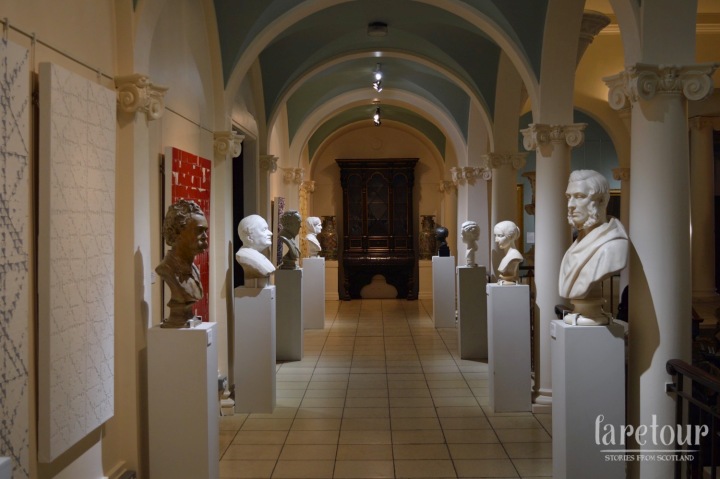 We did have a brief wander around the exhibits themselves — stopping off at The Art of War and Perth’s Beginnings displays — but you really need to dedicate a few hours to exploring here. Discover more about the museum on this website. 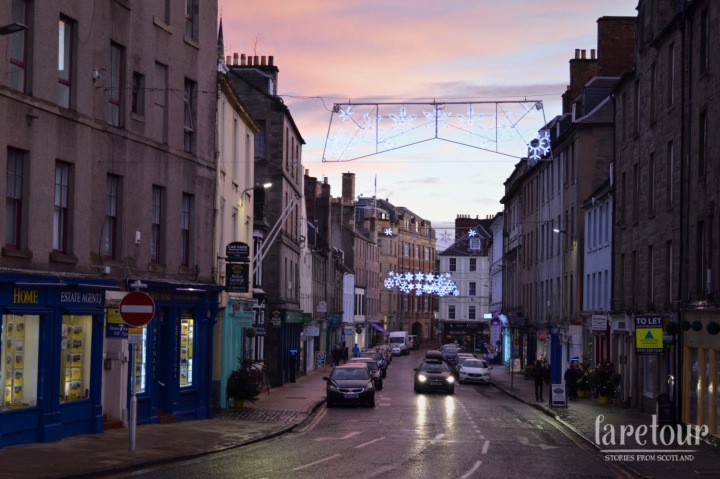 The sky was pink as we came out of the museum, so we headed towards West Bridge Street. From this viewpoint, there were a few things to note: the River Tay licking past its banks, the silhouetted church spires, and a heron leaping to the next stony island to escape a local boy who was taking photos. 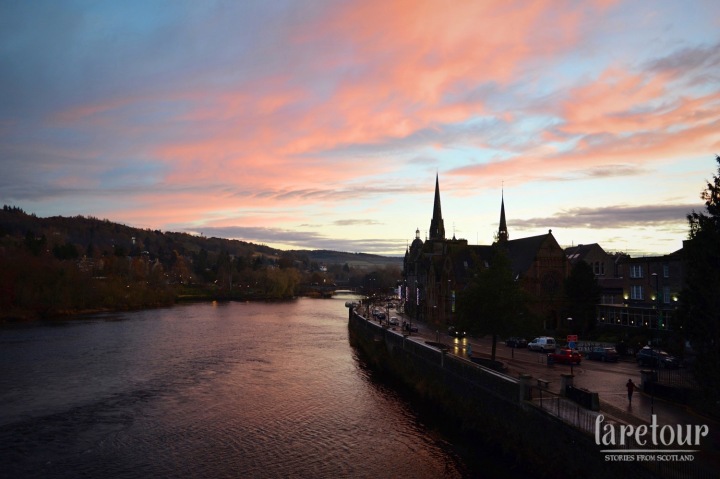 The boy crossed the bridge and stood next to us. ‘Did you see the heron?’ he said, and we nodded. ‘There was also a seal here once, too!’ He proceeded to show us a grainy phone photo of a seal which had made its way up the river to chase salmon. This place really is on the edge of Highland nature. 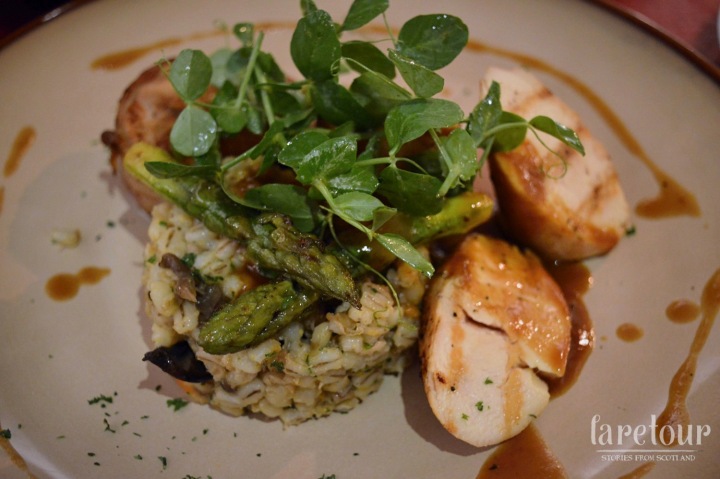 At night we headed for the square around St John’s Kirk, which seems to be a mini mecca for good restaurants (I can recommend Howie’s Bistro too). But our Saturday night stop-off was Café Tabou, an eatery that came highly endorsed by the hotel concierge. And wow, I really did feel like I was back in France… Meat cooked perfectly, kilo-full bowls of mussels and the lightest desserts — all with a good shot of Scottish character, of course (I can’t ever resist a big bowl of Cullen Skink!) 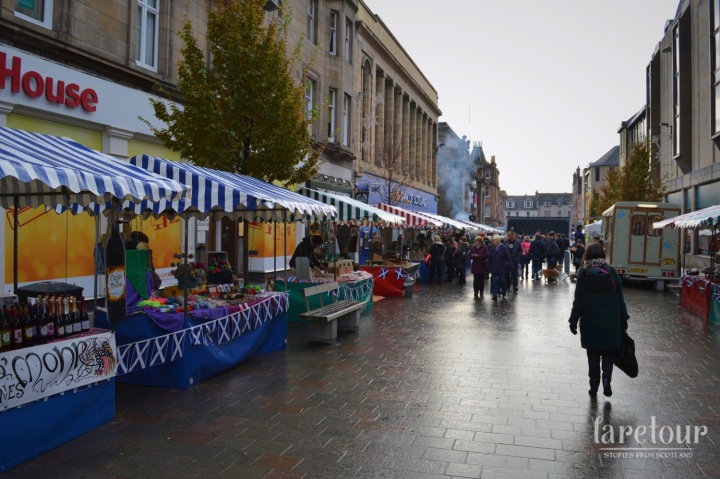 After a plateful of bacon, hash browns, haggis and all the black pudding at the Salutation Hotel, we hit the streets to eat yet more food. Sundays’s festivities were all part of Perth’s St Andrew’s Day celebrations so the lines of stalls had a very Scottish flavour: wine, cheese, cakes, fish and bread all added to the eye and nostril candy in the air. 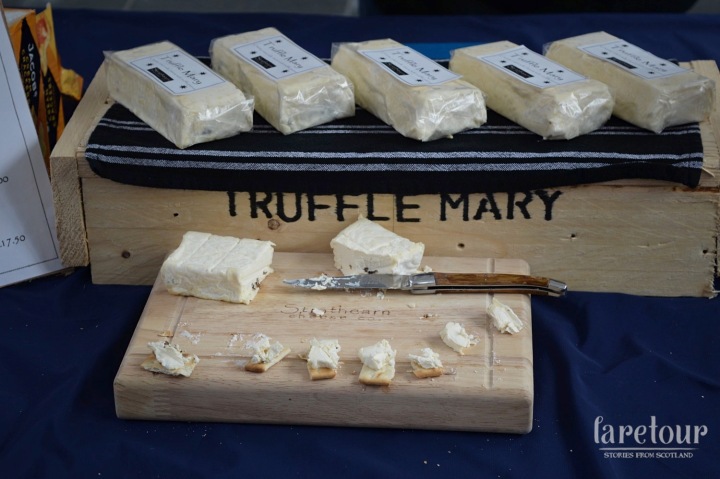 A few of my favourites were the cheeses from the Strathearn Cheese Co. (of which one had recently bagged gold in the World Cheese Awards), super sweet Irn Bru cupcakes by Graeme Maxwell (a.k.a. Big G), very smoky Arbroath Smokies and the amazing pulled venison burgers we had for lunch. 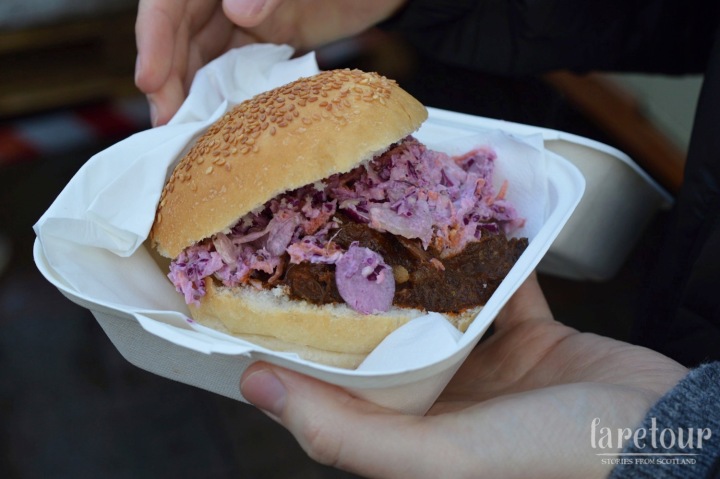 The Scottish market literally led to the stage where a handful of local and big-name bands helped Perth celebrate St Andrew’s Day. From early afternoon, local folk band Mad Ferret got the crowd bouncing — literally — as we all took to the pavement to dance a Gay Gordon to Mhairi’s Wedding. Then it was the turn of Dougie MacLean, whose ever-moving Caledonia brought tears to my eyes (I’m sorry, I’m just so damn patriotic). 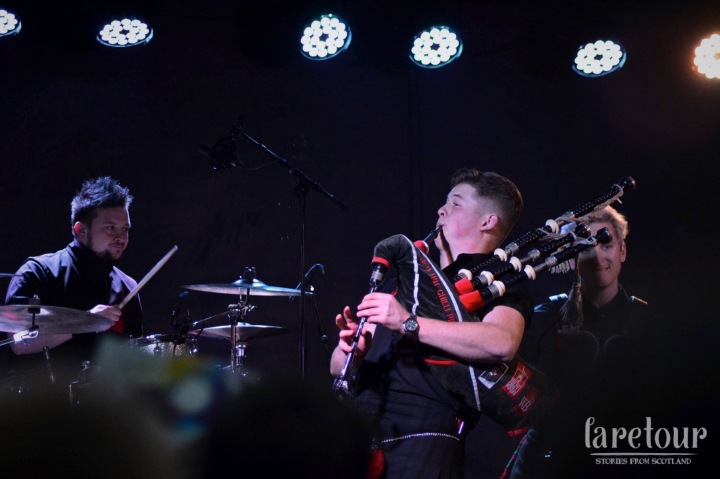 And if that wasn’t a big enough slice of Scotland for us, the Red Hot Chilli Pipers were the closing act. Blasting their own tunes plus some well-known chart hits on the bagpipes, these rockers were the perfect end to the St Andrew’s Day party. 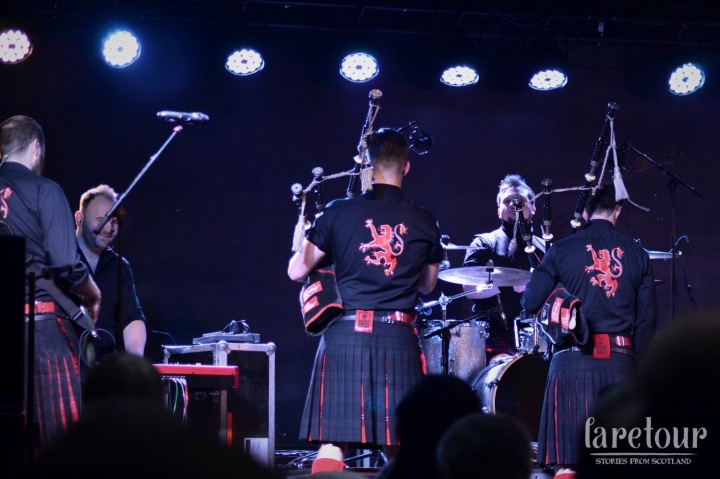 How did you celebrate St Andrew’s Day?

2 thoughts on “A winter weekend in Perth, Scotland” 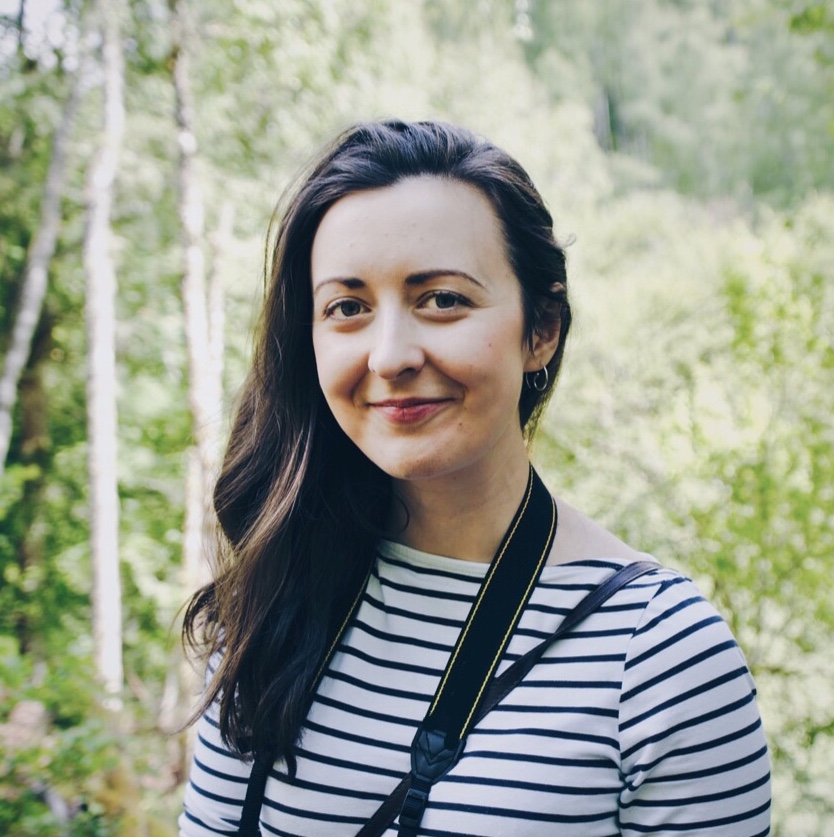 Hello, I’m Laura! Welcome to my little corner of the internet where I share moments from my adventures slowly exploring Scotland with a book, camera or coffee in hand. On weekdays you’ll find me in an Edinburgh office doing digital marketing, but I’m happiest at weekends when I’m in my walking boots.

Finding and following a track on the map without any expectations can bring beautiful surprises. A series of lovely little lochans reminded me that sometimes the best day trips are the ones you don't really plan at all ✨ P.S. Those who took part in that impromptu Q&A yesterday — your responses always get me thinking (and scribbling in my notebook) so thank you 😉 #storiesfromscotland #hashtagscotland ⠀ ⠀ #perthshire #itsprimupnorth #hiddenscotland #bbcscotlandpics #visitscotland #onlyinscotland #scotlandisnow #omgb #thisisscotland #suitcasetravels #slowadventure #slowtravel #sustainabletravel #simplyscotland #outandaboutscotland
When the sun comes out just before you reach the summit ✨ A little series from last week’s hill walk, not far from our neighbourhood — proves you don’t have to drive to the Scottish Highlands to feel light years away from normality 💙 #storiesfromscotland
‘I have never felt as rich as I did in that moment of silence’ — Erling Kagge ✨ This quote is from a lovely little book called Silence in the Age of Noise. It's the kind of thing I love to read during train journeys to remind myself that life doesn't revolve around the 7am commute (she says, shivering at the thought of getting up tomorrow) 😉 #storiesfromscotland #welcometofife #littlestoriesofmylife #documentourdays #slowtravel #itsprimupnorth
Frosty mornings at Mount Stuart (a lovely memory from last year I never got round to sharing during the pre-festive rush... and sickness) 🙈 Here's to more moments like these with family and friends in 2020. Happy New Year ✨ #storiesfromscotland ⠀ ⠀ #visitbute #onlyinscotland #lovegreatbritain #itsprimupnorth #hiddenscotland @mount_stuart #thisismykingdom #mybritainwithlove #seasonspoetry #winterstories
Is home where you thought it would be? I grew up in a village on Scotland’s west coast and always saw my twenty-something self living in Glasgow 🎓 But when my first job offer after graduating was in Edinburgh, I had no choice but to jump (cue trying to find a flat in two weeks!) With my other half starting work in Dundee a year later, it made sense for us to find somewhere new in between these Scottish cities. That’s how, decades after my grandfather asked my grandma out on a date in their home county of Fife, we found ourselves there too. And when weekends look like this — a wintry wander by the harbour, looking back at where we started our post-uni lives together — it all feels totally unexpected but, at the same time, just like home ✨ #storiesfromscotland
It’s been one of those weeks where no matter how fast you work, the to-do list doesn’t seem to shrink 🙈 How’s everyone else’s been? Safe to say I’ll be spending most of this weekend recharging on the sofa, planning some walks like this for our little trip up north later this month 🏴󠁧󠁢󠁳󠁣󠁴󠁿 #storiesfromscotland
Sunset on our local beach yesterday, looking back on what my partner calls ‘our former life’ in Edinburgh 😂 In a way it does feel like that, swapping the city for the countryside... I don’t know about you, but I’d take trees and beach walks over traffic and buses any day 🌿 #storiesfromscotland #welcometofife
Do you take your camera everywhere? Earlier, I realised that the photos from this day (a wander around lochside footpaths & beneath squirrel-tapped trees) are the *only* camera shots I’ve got from this October 🙈 Is that a good thing? On one hand, it’s one less device to curtain my IRL experiences. But then again as I get older memories merge into another, so it becomes more important to have tokens of nostalgia, even if they’re digital... What do you think? 🍂 ( this reminds me of a DM chat I had earlier this year with @coppernotes!) #storiesfromscotland #hashtagscotland
AD | When it's a dreich weekend, you'll find me reminiscing about autumn on the Isle of Bute — so Bute-iful (so sorry, I couldn't resist) that we're going back for the Christmas market 🍂 PS I've got a few more photos to share from my #westcoastwaters trip, and they'll be marked as ad because them's the rules 😉 ⠀ ⠀ #storiesfromscotland #YCW2020 #onlyinscotland #hashtagscotland #hiddenscotland #framedbynature #upandautumn #aseasonalshift #bitsofbuildings #kings_villages #cntraveler #architexture #scotlandisnow @visit_bute @westcoastwaters #capturequiet #myeverydaymagic @mount_stuart

All content © LARETOUR Scottish travel blog 2013-2019. Please obtain written consent via the ‘about me’ page before republishing anything you see on this website.