Even though I’ve only lived in the Scottish capital for a year, I’ve lost count of the times I’ve passed by the tall dark gates, peered curiously through the bars or seen tourists hurry towards the entrance. It’s one of those spots — a bit like Edinburgh Castle — which you see every day and therefore take for granted, so are less likely to step inside.

Yet last weekend, after a morning swathed inside a duvet to ward off the October chill, we followed the lanes around Holyrood Park, beside the unusual Scottish Parliament and between buildings — finally — to the palace. Surrounded by softly-changing trees, browning grass and bathed in late-afternoon autumn light, the Queen’s official residence in Scotland really was a thing of majesty. Though funnily, as you’ll perhaps gather from the photographs below, it was the grounds that really got me, full as they were with berries, golden trees and hidden history…

‘No one provokes me with impunity’, etched above the entrance to Holyrood Palace, was originally the Latin motto of the Scottish Stewart dynasty. Framed with thick columns and gilded lanterns, it’s a fitting welcome to this spanning stately home.

After wandering around the palace’s elaborate rooms, we headed into the gardens. It’s little scenes like this, terracotta berries in the flames of dying leaves, that I love to notice. This season is so full of details. 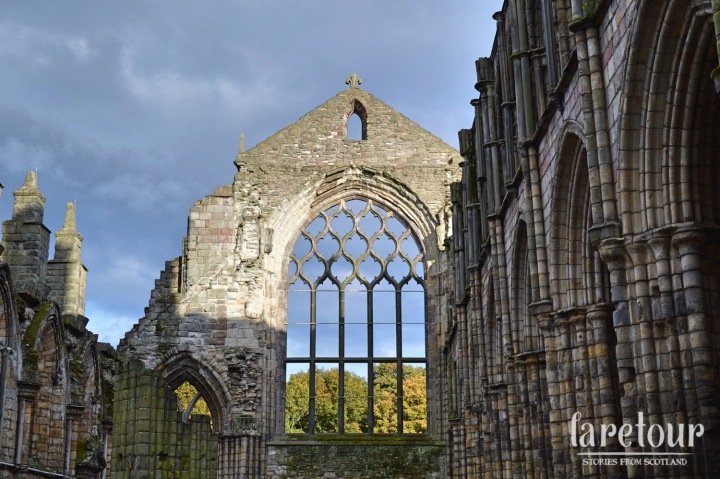 Your ticket to the Palace of Holyroodhouse doesn’t just let you peek through the keyhole into the Queen’s reception rooms. You’ll also travel back in time to twelfth-century Scotland as you wander on the earth where David I’s original ‘monastery of the Holy Rood’ once stood. Find out more about the abbey here. 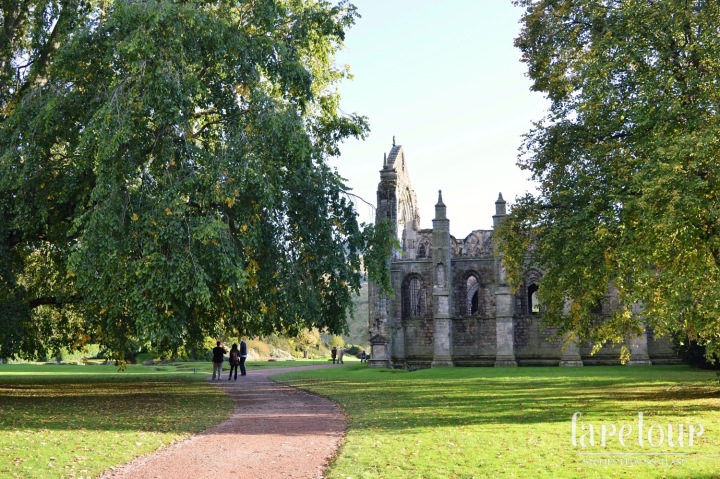 This litter of leaves.

I loved this view. The light was perfect, the leaves were falling and Arthur’s Seat is hiding just behind the left-hand tree (scroll down to see Edinburgh‘s extinct volcano in all its glory). You can also see a snippet of the carved details on the medieval Gothic nave of the abbey, dating from the thirteenth century. 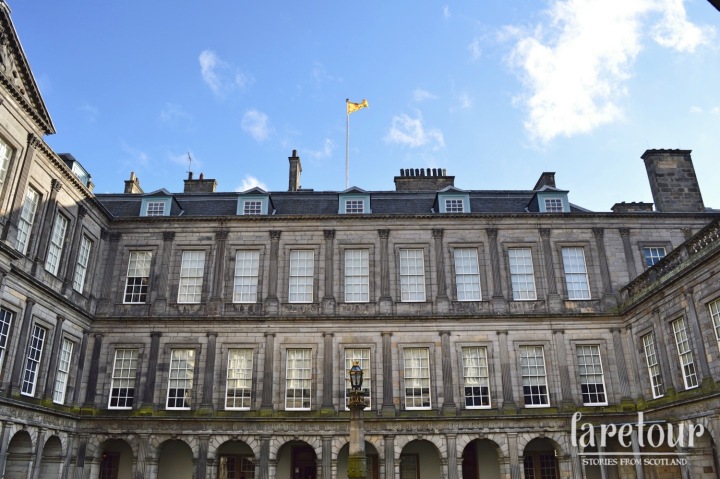 One is not at home.

Outside in the October chill, I stood in the cloisters and watched the bright flag rippling in the wind. This flag is the Royal Standard of Scotland which is used by the sovereign’s representatives in Scotland (like the First Minister) and it’s flown at the Queen’s residences when she’s not present. 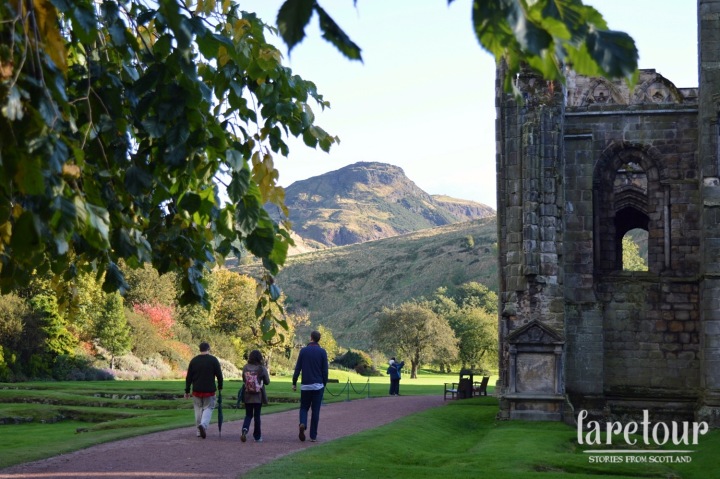 This has to be one of my favourite views in Edinburgh, tied with the skyline silhouette from Calton Hill. Framed by fading trees and the ancient Holyrood Abbey, the extinct volcano grows on the horizon. It’s a weird paradox, having such a hill in the middle of a city, but it’s one of Edinburgh’s many unique selling points.

Need I say more? I took this photo not long before five o’clock, staring back into the sun to see those shadows silhouetted on the lawn.

Looking at this view, you’d be forgiven for thinking you were miles from the nearest major train station, shopping epicentre or cluster of crowds. But if you look closely, you’ll spot tiny dots on the summit of Arthur’s Seat, the day’s tourists taking in the view across Edinburgh. Another thing you might not notice is how the Holyrood Palace lawn seems to slope upwards towards the rough grass. In fact it does and it rises to meet a high wall (a ha-ha) which separates the palace grounds from the public spaces beyond.

I have this thing with trees…

You can see why, for centuries, authors have been inspired by Edinburgh — this gatehouse could easily translate onto the pages of Harry Potter. But what I found so splendid — and yet again is testament to those little autumn details — is that wee gold tree next to the left-hand turret. GOD. I just love this time of year!

I’m an outdoor enthusiast, bookworm and social media manager based between Fife and Edinburgh. In this little corner of the internet, you’ll find inspiration for weekend adventures, ideas for slower travel, and short essays on how social media is changing the way we interact with landscapes in Scotland and beyond. I hope you enjoy exploring a slightly different side to this beautiful wee country with me.

All content © LARETOUR Scottish travel blog 2013-2020. Please obtain written consent via the About page before republishing anything you see on this website.