When you’re travelling in Scotland, there’s certain spots that will have been etched on your ‘to-see’ list for months: Glen Coe, the Isle of Skye, Edinburgh Castle, even the North Coast 500 if you’re really taking in the culture. One region, though, that you may have skipped past in the guidebook is Dumfries and Galloway.

Scotland’s most southerly area, Dumfries and Galloway might not have the glacier-scratched mountains of the Highland glens or the cracked coasts of the wild north-west, but what it doesn’t have in obviously in-your-face landscapes it makes up for with history and sheer charm. Here’s my pick of the prettiest spots in one of Scotland’s more overlooked regions. A big thanks to the lovely Solway Tours for carting me round during my visit! 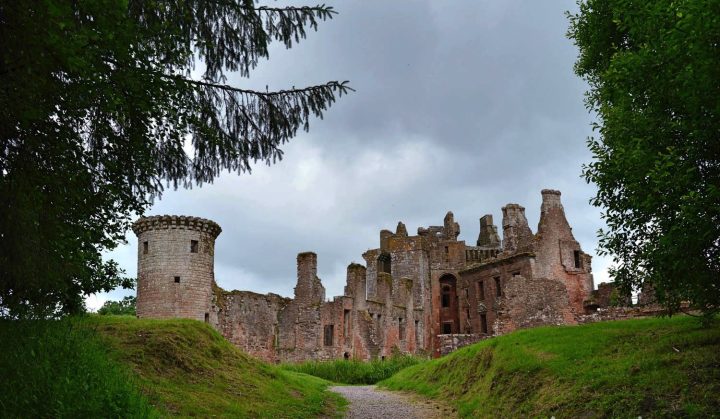 When you think of Scotland, is it all majestic mountains and fairytale castles? Well, with Caerlaverock you can tick the latter off your list! The red sandstone walls are impressive enough, but what really makes this place magical is the double moat around the castle. One is dry now, but the other plays background to summer swallows and wild flowers, adding another layer of ‘pretty’ to this remarkable place. Go inside, and you’ll find that behind the medieval walls is the seventeenth century Nithsdale Lodging, the domestic counterpart to the defensive castle. There are some delicate carvings in the stonework here, highlighting how the Maxwell family might have lived in days gone by.

The photo spot: From the entrance to the castle, follow the high grass around the moat to the rear of the castle (or the back of the ‘triangle’, Caerlaverock’s unique shape). There is a worn path into the undergrowth, which — if you follow it a little further — frames the rear of the castle really beautifully (as well as showing off the Nithsdale Lodgings).

Travel tips: Caerlaverock is a 20 minute drive from Dumfries by car. The site is managed by Historic Environment Scotland and entry is £5.50 (adult), £3.30 (child) or free for members.

Visitors do tend to fall in love with the romantic aura of Scotland, and the story of Sweetheart Abbey only underscores this stereotype. Again built from the iconic red sandstone, this abbey was founded in the thirteenth century by Lady Devorgilla. As our tour guides pointed out, there shouldn’t have been one Cistercian abbey so close to another (namely Dundrennan, which you’ll read about below). However, it was testament to Lady Devorgilla’s clout — and heartbreak — that Sweetheart grew out of the ground in 1273.

What’s in a name? On the death of Devorgilla’s husband John Balliol, she kept his spirit forever near her by carrying round his embalmed heart in an embellished ivory casket. Devorgilla died and — when she was buried in the abbey — the resident monks renamed the monastery ‘Dulce Cor’, or Sweetheart Abbey. Times were not always to be as tame, however, as after the Protestant Reformation the abbey soon began to crumble thanks to nature — and the locals! Some of the buildings in the adjacent village of New Abbey are built with Sweetheart stone, although apparently inhabitants used to paint the facade to hide this association.

The photo spot: Just along from the visitor centre, you can hide among the trees and — if you’re lucky! — capture the midday sun touching the red stone. Inside, the huge ribs of the nave are, as expected, stunning.

Travel tips: Sweetheart is a 20 minute drive from Dumfries. Maintained by Historic Environment Scotland, entry is £4.50 (adult), £2.70 (child) and is free for members. And if you’re visiting PLEASE do not miss the adjacent Abbey Cottage! We had an incredible afternoon tea at this award-winning eatery with some cracking clotted cream scones and a light-as-a-feather Victoria sponge. 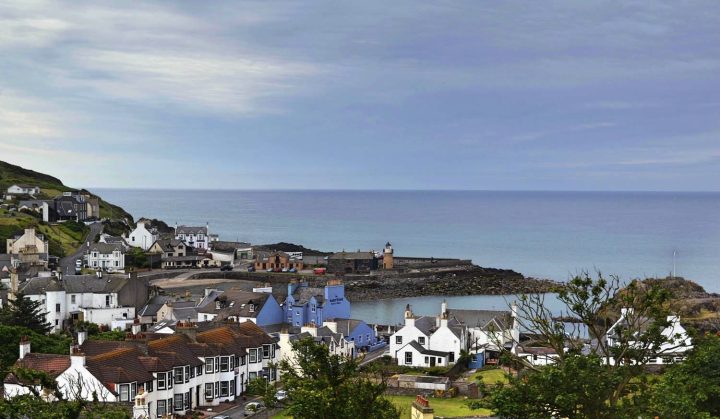 This pretty town, with its pastel-hued houses, sits right on the western edge of the Rhins of Galloway peninsula. Pace is slow, dictated by the comings and goings of the local boats in the harbour bay, so it’s a perfect escape if you want to go back to a time with little technology (my signal was notoriously awful, which definitely ISN’T a bad thing).

Wander down to the marina, stroll up the streets or take a hike: namely the longer, circular walk to the photogenic Dunskey Castle. Built in the sixteenth century on crags overlooking the vast Irish Sea, the building was sadly derelict by 1700. Nevertheless, the crumbling ruin makes for some pretty impressive shots, especially when sunset is the backdrop.

The photo spot: On a still Sunday morning, I dawdled around the harbour walls. There are some good places here to capture the reflections of the boats and ropes and — even on a cloudy day — the water looks almost turquoise. There are also unspoiled views back across to the colourful Portpatrick, plus you’ll get a glimpse of the local, bright orange Tamar-class RNLI lifeboat.

Travel tips: Portpatrick is less than two hours’ drive from Dumfries, and you can stay the night in the Fernhill Hotel. Like the ‘hill’ part suggests, the hotel enjoys beautiful views down into Portpatrick’s bay (see photo). After sipping a sherry in the lounge, I spent twilight watching the sky get gradually darker as the lighthouse began to illuminate. 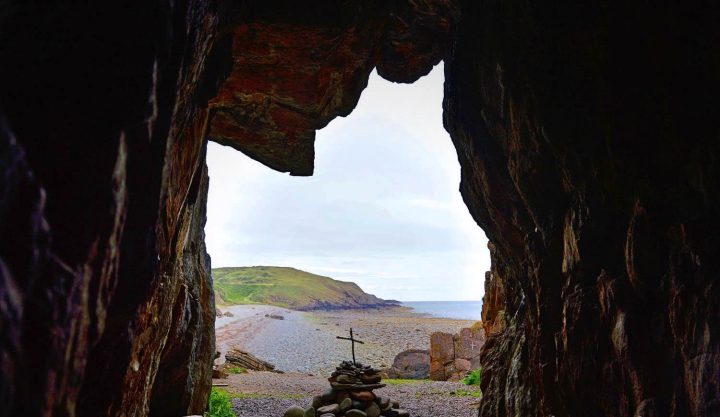 Hidden away on a pebbled beach about 4 miles from Whithorn, follow in pilgrims’ footsteps as you make your way out to this impressive cave. St Ninian, Scotland’s first saint, founded his early church in nearby Whithorn but — when he wanted to reflect — would allegedly make his way out to these cliffs.

For centuries, followers of St Ninian have walked the short mile through the leafy Physgill Glen before stumbling upon the exposed and stony Port Castle Bay. The bay itself is impressive, but on turning right, you’ll notice the narrow mouth of St Ninian’s Cave slashed into the rock. Measuring around 7m long and 3m high, the hollow is believed to have collapsed since Ninian’s day but is nevertheless impressive, with crosses still etched into the cave walls.

The photo spot: Inside the cave, of course! I was lucky enough to have visited not long after a group of schoolchildren, who’d created a picturesque cairn at the cave entrance.

Travel tips: Whithorn is an hour and a half from Dumfries, then park at Kidsdale to start the walk. The full route can be found here on WalkHighlands. And if you’re hungry — like we were after hours of exploring! — then head to the cosy Harbour Inn at Garlieston. We tucked into a HUGE carvery which brought back memories of Christmas, it was that good. 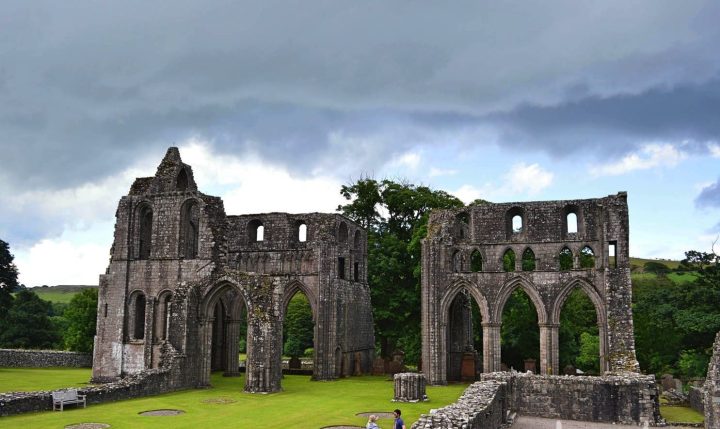 The granite mother abbey to sandstone Sweetheart, Dundrennan was Galloway’s first Cistercian abbey. Founded in 1142, it is famous for retaining some of Scotland’s best examples of early Gothic design… and for housing Mary Queen of Scots before she was finally imprisoned by the English.

Regardless of the abbey’s ruined state, you can imagine how beautiful this building must have been. The north and south transepts still stand, their grey skeletons mottled with age and coloured with yellow moss. There’s a silent and time-stopped quality when you wander around Dundrennan, an atmosphere only amplified when I visited by the black storm clouds building overhead.

The photo spot: On the right, when you’ve just entered the abbey grounds, there is a viewing platform created from an old building. Stairs lead up and you can get some higher panoramas across the ruins. Another unique shot can be taken from the graveyard looking back through the three transept arches.

Travel tips: Dundrennan Abbey is a 45 minute drive from Dumfries and just over 10 minutes from Kirkcudbright, the artists’ town. Historic Environment Scotland manage this beautiful building and entry is £4.50 (adult), £2.70 (child) or free for members.

Where is your favourite spot in Dumfries & Galloway?