I love the Trossachs.

Sitting north-east of Loch Lomond — about an hour from Glasgow — it’s a range of rolling hills, hidden lochs and cute cottages on the waterfront. It’s one of those ‘places of my childhood’. Do you know the ones I mean? Those hideaways you always feel safe in, that bring back fuzzy memories of sitting in the backseat of the car feeling sick, or cycling alongside a loch and then stopping for soggy sandwiches in the rain.

But that feeling of motion sickness always fades once you take the road north out of Aberfoyle and park up, finally stationary, at the Lodge Forest Visitor Centre. I came here so many times as a child that it was a shock to see it revamped last year: the café now commandeers prime views across the forest whilst the interior is white, modern. Go Ape — which I visited not long ago with my Dad — is just adjacent. 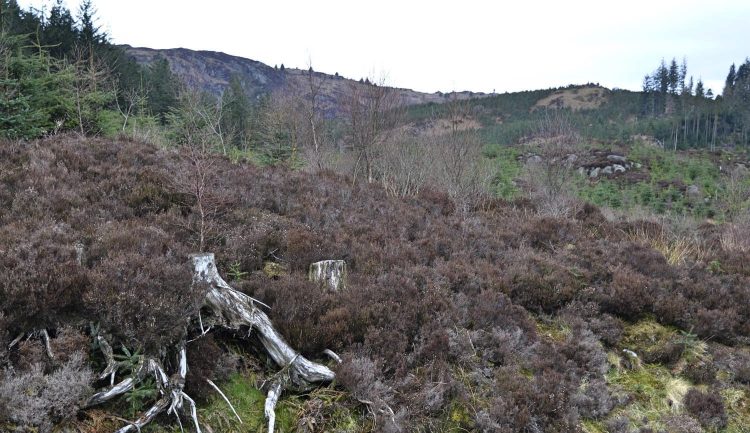 Last Sunday though, Dad and I weren’t monkeying around above the forest.

We were underneath the canopy, hearing the whizz of the next body shoot across the zip wire high above us. Following the path towards the waterfall (every child’s favourite, trust me) we then took the trail on the left. It’s a steeper path that leads up through tree boughs and meets that windy road — the Duke’s Pass — to Loch Katrine.

After crossing the tarmac, formerly a droving road, you’re soon back onto dirt.

This trail is called the Duke’s Trail, and it follows the stunted forest on the hillside before crossing back into the spruces (a little higher from where we began at the Lodge). From the forestry road, with the trees looming overhead, Dad and I watched a parade of motorcyclists weave along the pass. Quite a noise in an otherwise silent place!

A wee while later, it gets strenuous.

The Duke’s Trail then meets another at the base of Lime Craig, a hunk of rock that was once quarried. There’s a steep but short path around the side of this chunk of hillside, then — after another twist to your right — you are suddenly rewarded with beautiful views over the Highland Boundary Fault. Dad and I sometimes pause at the top, sitting on the concrete base remainder of a communications mast, drinking tea out a flask. Or eating Rich Tea biscuits. He’s not a fussy snacker! 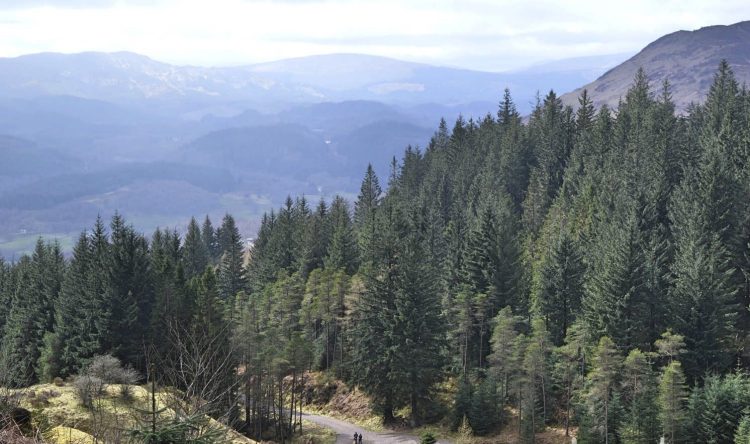 This time though, Dad spoke with another group of older walkers as I took photos of the surrounding hills: Ben Ledi, Ben Venue and the glint of loch I supposed might be Loch Katrine. When I returned to the bigger group, face still burning from the short climb, the strangers were sipping on plastic cups. They’d brought a flask of whisky to the summit, their way of celebrating a Sunday out in the Trossachs. Gotta love Scotland! 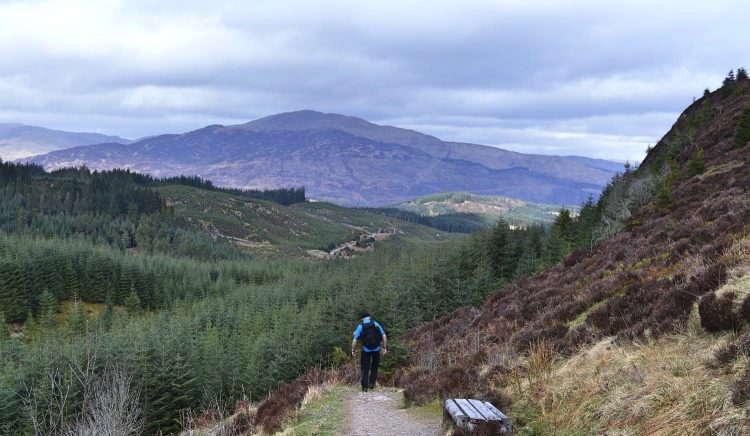 The descent is quick and steep.

Soon we were back at that impressive waterfall that’s the heart of the Lodge Forest area. There are several hammocks strung between the tree trunks here, and — if it wasn’t such a popular place — I imagine it must be lovely to relax here with a book, the sunlight gently touching your skin through the leaves. 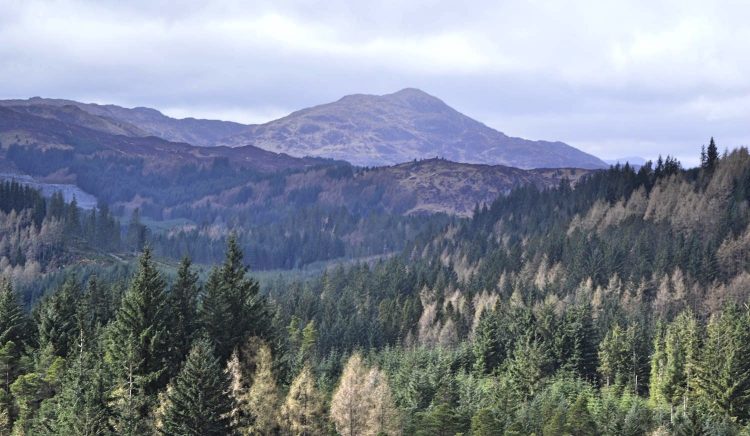 The two circuits joined together — although ‘strenuous’ by Forestry Commission standards — aren’t quite that. In reality, they are a stroll through old spruce woods, tall pine forests and a short stretch to an exposed summit. It’s little effort for the beautiful views you get south towards the Campsies and north into the Trossachs, right on the line of the Highland Boundary Fault.

So regardless of whether you’re a seasoned Munro bagger or just a casual wanderer, this is a short and sweet walk to savour when you’ve got a few hours spare on a Sunday afternoon.

Where are your favourite walks near Aberfoyle?

3 thoughts on “A short and sweet walk above Aberfoyle, Trossachs”