After returning from Italy at the end of September, we set ourselves the nigh-impossible task of finding a flat before I began work. That gave us the sum total of just two weeks. And yep, you guessed it — it was a total stress! We began by looking on Rightmove, which furnished us with a list of well presented agency properties mostly south of the city centre.

We were ready to make our first trip east in search of a flat.

That day began well: we saw a small but sweet top floor flat near Merchiston (the kitchen was more of a cupboard though…) and then a spacious yet sparse two-bed close to the west end of Princes Street. We liked neither, and were counting on our appointment with one of Edinburgh’s most well-known agencies to deliver the bounty.

No such luck. We arrived at DJ Alexander’s offices bang on time, and waited excitedly in the lobby. Five minutes passed, then fifteen. We looked at each other, concerned. Had they forgotten us? Surely not; I’d only phoned a few hours before to ensure our favourite flat was still available. Finally — after a lot of squirming on our seats — a woman appeared. We are sorry, she blurted detachedly, but three of the four properties you’d booked in to see have been taken. We’re just trying to find you some others to see now.

I couldn’t believe it — hadn’t I just phoned earlier, and none of this information been conveyed to me? Had we really traversed Scotland coast-to-coast just to find out it had been a total waste of time? The short answer was yes. We let ourselves out of the agency’s offices disappointed, dejected and dreading the following few days of flat hunting.

In the car on the way home, we discussed our next steps.

Agencies obviously weren’t going to be much use unless we set up a temporary home in Edinburgh (how else could we view a property the day it went online?) B hummed and then suggested we use Gumtree. Having found flats through the site for the past three years, he had positive experiences with private letting and compassionate landlords.

As we zoomed back towards Glasgow on the busy M8, I downloaded the Gumtree app on my phone and began browsing. I saved searches for both one- and two-bed properties within a three mile radius of Edinburgh’s centre, and turned on notifications. I barely ever download apps on my slow Android: this was getting serious.

And then I refreshed the page. ‘Two bed property with period features and stunning views over Arthur’s Seat’. I clicked on the ad. The photos weren’t too detailed, but the rooms looked white, bright, spacious. I showed B and he nodded. I quickly tapped out an email and set it to the landlord via Gumtree mail. 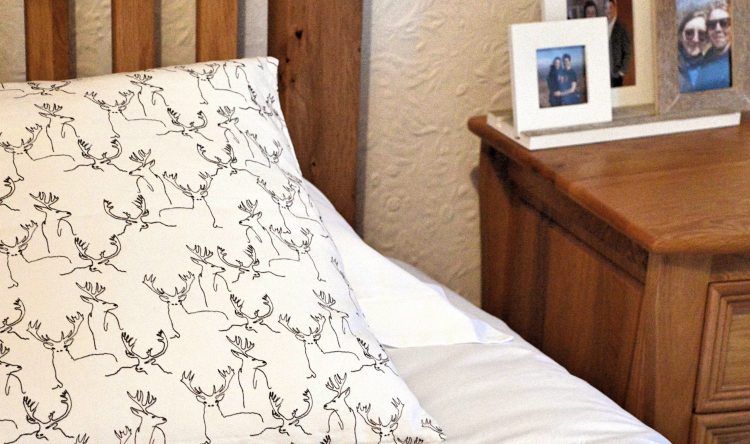 The next few hours and days were a total blur.

Within a handful of minutes, the landlord had replied to my email, requesting further information. I called him the next day, we set up a viewing for the Friday (just two days after our first disaster) and on Friday evening we were wandering around the flat.

As I’d hoped, the photos were just a tiny glimmer of what the property was really like. High corniced ceilings with white walls and cream carpets; a vintage Victorian range in the quirkily decorated living room; heavy oak furnishings set off by a large photograph of Paris in the bedroom and — the cherry on top of an already awesome cake — amazing views across to Arthur’s Seat. We couldn’t contain our excitement. Even B, who is the king of understatements, could not stop himself from saying: ‘this is just perfect’.

How the landlord chose us from the half dozen people he met that evening, I have no idea. After a sleepless night, we received a phone call the next morning letting us know that we had been chosen, the other viewings were cancelled, and could we sign the lease tomorrow? By Sunday, we were holding the keys to our new flat. I mean… Seriously?!

I will never know how the cosmos aligned that week and gave us such luck. We could move in, settle and feel at home before I began work the following Monday. Phew. A lot of stress and cut-throat agency tactics later, and that was it: we were officially east coast residents.

5 thoughts on “How to find a flat in Edinburgh”