As the crow flies, the canal-side village of Crinan is just thirty miles from us. Unfortunately (fortunately, really!) we live on the west coast of Scotland. The spectacular scenery here – bending sea lochs and skyscraper mountains – doesn’t lend too well to tarmac additions. The road stretches for almost eighty miles. Limbs freeze in uncomfortable seats. Is it worth it for just a fleeting visit?

If you’ve never been to Crinan… well, it’s like stepping back in time.

Past Lochgilphead and following the Crinan Canal, the B-road narrows and eventually spits you out at Crinan Basin. Yacht rigging tinkles in the wind; water pours through the lock gates; occasional buildings welcome boaties and tourists. The lane is large enough for one car and primarily runs round the headland. Most vehicles are abandoned in the car park. People wander down past the locks and watch the water-borne traffic negotiate more traditional pathways. Modern hiccups are half-forgotten. 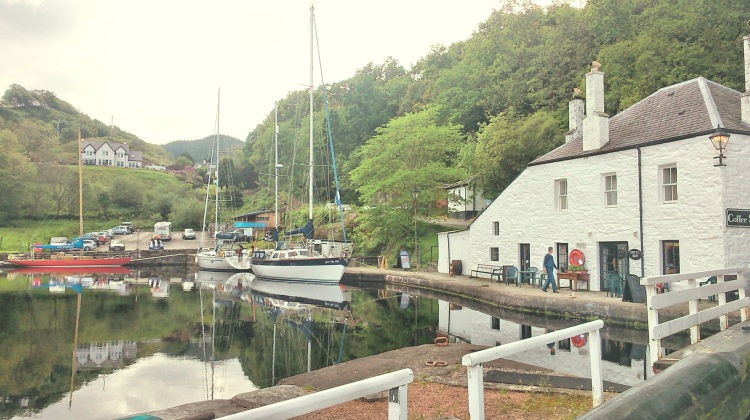 First stop is the coffee shop just beside the basin. Everything is baked fresh at the Crinan Hotel, however at this late time of day, only several tray bakes remain. Service is rather sedate but I’m patient: we take shortbread and chocolate cherry slice. The latter is gooey, chewy and rich. We’d take more, only dinner is in an hour or so. A huge pot of tea later, and a walk is on the cards. 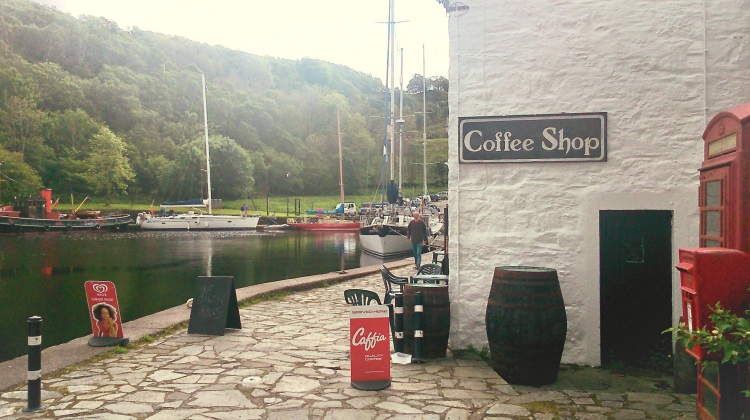 We cross at lock fifteen onto the opposite side of the basin and join the path along the canal side. Boats move slowly past; there is a duck with seven babies skimming above the water. Clouds flirt above Jura and Scarba in the distance. 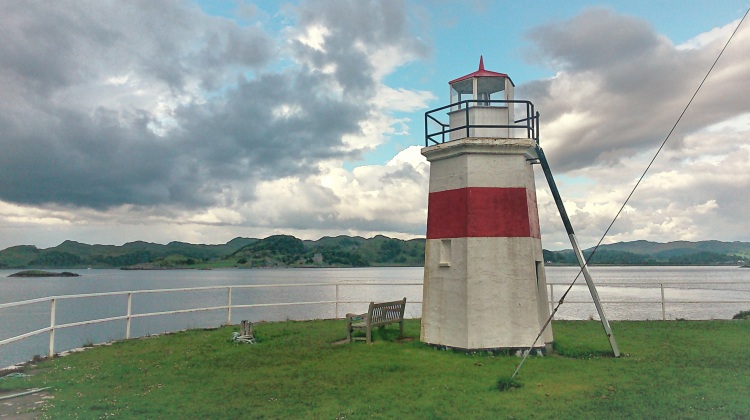 The towpath stretches to Ardrishaig, the opposite end of the canal, and walkers and cyclists use it amicably. Even just a few minutes walk from the tiny village, there are some beautiful sights: Crinan Bridge and the neighbouring white cottage; Bellanoch basin; the plains woven by the River Add.

It is a stunning area of the west coast.

Regardless of rain, there is something about Crinan – it’s familial spirit and unhurried pace perhaps? – that brings tourists and yachties back time and time again. Oh yes, and the hotel. By six we’re sitting in the Seafood Bar. Curls of battered fish swell from white plates, ales are poured, smoked salmon flakes onto marble dishes, scallops and sea bass are delivered to adjacent tables. It’s coastal and crisp (the batter is not greasy, I’m assured; the salad well-dressed) and it’s crowded. Although it’s a moody May evening, there’s no better signal.

I find myself in the car again a few hours later, flying past Inveraray, the Rest and Be Thankful, Loch Lomond – and I’m spat back home. The television is turned on. I think of towpaths and hinterland. Further information about food, accommodation and travelling in the local area can be found on Crinan Hotel’s great website.

Where would you visit on the west coast?